Skip to content
theBookkeeper247 8 months ago 8 min read
Contents hide
1 We want to thank Q-Flo for taking the time to sit down with us for this interview. Q-Flo did this interview a while back but due to the pandemic of COVID-19, the interview was misplaced.
1.1 Q-Flo is an upcoming Christian hip hop artist from North Philadelphia with a very good project out now entitled “War Drum” and his latest single “Been Free” is a banger!
1.2 Video – Q-Flo “Been Free”:
1.2.1 theBookkeeper247

We want to thank Q-Flo for taking the time to sit down with us for this interview. Q-Flo did this interview a while back but due to the pandemic of COVID-19, the interview was misplaced.

Q-Flo is an upcoming Christian hip hop artist from North Philadelphia with a very good project out now entitled “War Drum” and his latest single “Been Free” is a banger!

Where are you from?

Im originally from West Philly but I was raised in North Philly.

My upbringing wasn’t that bad. I was raised in a baptist church where CHH did not exist in. After my parent’s divorce, my mom took me and my younger brother to a non-denominational church and we attend that same church today.

How did you come to Christ, (your salvation story)?

I was introduced to Christ as a child. However, my salvation story comes from being bullied all my life. It made me question why i was always a target to physical and mental abuse. My youth pastor spoke to me about God’s love and how the “friends” I chose weren’t really for me. After that, life started to become positive and I knew it was God who made it happen.

What was your first introduction to music?

My first introduction was from my dad. He’s a drummer and he used to play all kinds of music in the car from rap to jazz, gospel and old school music. My mom always told me that I inherited my dad’s ear for music.

How did u get into Christian hip hop/ #Chh?

After I became a member of my current church, I found out that they had a seperate church for teenagers. I went to one of their services and a few older guys visted us and started rapping. I told myself “If they can rap about God, so can I”, and the rest was history.

How do you feel about Chh as a whole?

As a whole, I feel like Chh is a great movement. The music is dope and I ALWAYS get told “The facts that you dont curse and still rap well is outstanding”. God really gave us a gift and I thank him for it.

What are the positives?

The positives. Well first and foremost God is being glorified in rap music. 2ndly, I would say the positives are that we make encouraging music, music to build people up.

What are some of the negatives?

The one big negative is a lack in unity. Majority of artists only support people that they’re friends with. But they wont show that same support to an outsider even though we all got the same goal and rap about the same God.

There’s also pride. A lot of us have way too much pride. I went through a time where i needed to be extremely humbled. However, that’s a whole story for another time.

When did you know you were called to change lives for God in your music?

I didn’t know I was called to change lives until someone I didn’t know came to me while I was working at Walmart and said “Aren’t you Q-Flo? That song you did [at whatever show it was] really encouraged me.”

I was shocked because it was a small crowd in a large venue. That’s when I realized the number didnt matter to me because God has at least 1 person being encouraged from it and that’s a win in my eyes.

Tell us about the new album/EP? Upcoming Project?

My album is titled “War Drum” and I made it as a way to let people know we are at war, whether it’s war with ourselves or other people. I also wanted people to know that I at war as well because nobody is perfect and we all go through our trials.

Tell us about the single?

The original single I dropped was called “Tales of the Flesh” but the song im pushing more is “The Layover” and I came up with the idea in an airport and started writing it on the plane. I used the layover inwas going through at the airport as a way to let peole know that our issues are only temporary and we will survive them.

What do you hope people will get out of your music and upcoming projects?

I just want people to know that we serve an awesome God, that he will forgive us if we make ourselves vulnerable, and I also want them to actually enjoy the music.

Who influenced you the most in music?

Living in Philly, most of my influences came in the form of battle rappers. I studied alot of them and CHH artist. So my top 5 would be
Reed Dollaz
Joey Jihad
Eshon Burgundy
Atiba Halisi
And Don Cephas

Who influenced you the most in life?

In life, my influences are my Two Youth pastors. One taught me how to be a man, the other taught me I could still have fun and be a Christian. She also gave me a job at the church when I was in need of one.

Who would you like to work with in the future?

I want to work with Th3 Saga, Derek Minor and Eshon Burgundy.

Favorite Bars On the last Project?

My favorite bars are

“There’s fire all through my hands, like my name’s Liu Kang”

“My sight is like the eye of thundera, boy I’m a Thundercat”

How much have you grown on this project, talent-wise?

Talent wise, I’ve grown A LOT. I went back to my old music and was just shocked like “did I really say this?” Thank God for growth. Even my engineering skills are better than what thet used to be.

How much have you grown on this project, Spiritually?

Spiritually, I definitely grew because this was my first album and I didn’t want to just drop any ole piece of work. I wanted it to be full of purpose and it took a lot of prayer and walking with God.

One of the biggest topics in the music business now is streaming, how does that affect you as an artist/owner?

Disclaimer: I’m thankful for all the streams and buys that I got for the album and I encourage people to at least give 1 song a listen.

Now, I was never big on number and streams because this isn’t a job for me. I rap because I love rap and I love God. Before I seen 10-11k streams I was celebrating 10-100 streams.

The main reason I take music seriously is because God gave us the charge to save lives. The money gained isn’t that serious to me because I have a good job and I’m currently in school for a better job. However, again, I’m still thankful for the support.

How hard is it to separate Ministry from the business?

It’s funny because it was tough for me. However it was because MY OWN PASTOR or pastors who I fellowshipped would ask me how much do I charge to minister, and I never wanted to take their money because they had a hand in my growth. But they were showing me that i was worth paying for. So now , it’s not difficult to separate the two.

How hard is it to separate both from family time?

It’s not hard to separate both because I’m not a father and my family are my biggest supporters. They push me to keep going.

What is your best advice for this generation?

The best advice is to be a supporter first. I’m a living witness that support doesn’t go unnoticed. Quick testimony to that.

I drove 5 hours to support my big brothers who were rapping at a concert at a Christian college and when I got there they made a slot for me to rap in front of a new crowd of people all because I made that trip.

What’s the best advice you can give an independent artist or label to be successful in the CHH genre?

Honestly, I’m not sure what I have to offer besides giving support to other artist who are going through what they once went through.

Where can we find your music?

My music is available on ALL streaming platforms. However, the album and future music will not be on soundcloud.

What’s next for you ( tour dates, new releases, etc)?

Next up is a video shoot for a cypher I’m in with a few Philly artists, I’m working on getting a few collabs done with artists outside of my city, and I’m working on a mixtape for this year.

How can you be contacted for booking and collaboration?

On your longest day and hardest battle, what scripture do you find strength in?

My go to scripture is Isaiah 41:10. I struggle with my anger and it calms me down.

So do not fear, for I am with you;
do not be dismayed, for I am your God.
I will strengthen you and help you;
I will uphold you with my righteous right hand. 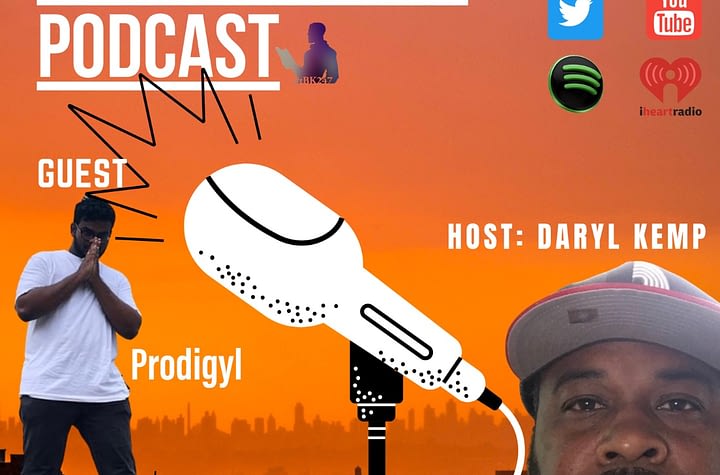 Behind the Mic episode 7 with Guest Prodigyl 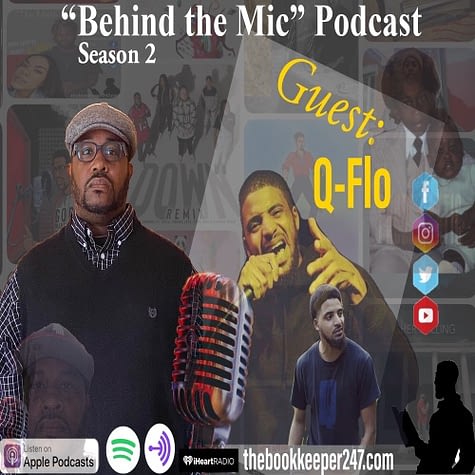 “Behind the Mic” Podcast Episode 5 with Q-Flo

“Behind the Mic” Podcast Episode 4 (Part 2) with BrianaRae